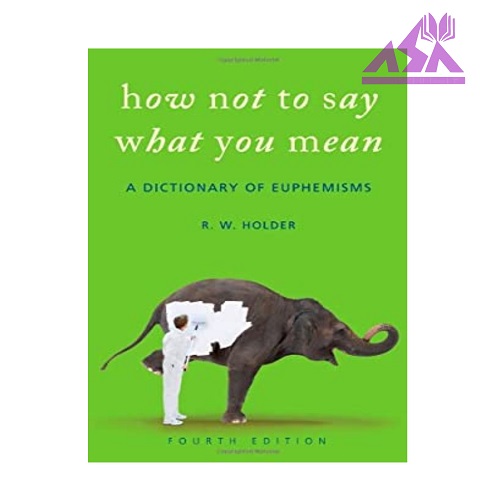 How Not To Say What You Mean A Dictionary of Euphemisms

نقد و بررسی تخصصی How Not To Say What You Mean

This thoroughly updated new edition of How Not to Say What You Mean celebrates 20 years of R. W. Holder's popular and successful dictionary of euphemisms, offering a delightful collection of jocular and evasive expressions for sex, death, murder, crime, prison, and much more
Here are almost five thousand euphemistic expressions listed in alphabetical order, ranging from well-known favorites such as "push up the daisies," "fly-by-night," "red light district," "take to the cleaners," "get lucky," and "five-fingered discount," to less amusing expressions from the bureaucratic and military world such as "restructuring," "collateral damage," and "extrajudicial killing." For each word or expression, Holder includes examples from real authors, along with entertaining explanations of the words origins and meaning. Thus we learn that "bite the bullet" (to make a difficult decision) comes from the fact that soldiers, being flogged, were once given a bullet to bite down on, and "Stool Pigeon" (an informant) comes from the practice of tying a pigeon to a stool to lure other pigeons to capture
New to this edition are over 250 new entries and fourteen introductory articles on major themes in euphemistic language, such as business, sex, death, and the human body. The book includes an extensive thematic index which groups words together under topics such as Age, Bankruptcy, Bribery, Copulation, Sexual Variations, Drunkenness, Erections and Orgasms, Farting, Funerals, Killing and Suicide, Low Intelligence, Politics, Prison, and Warfare
From "suck the monkey" to "surgical strike," here is a wonderful collection of colorful words that allow us to avoid life's unpleasantries as we add spice and humor to our everyday speech
"A must for tiptoeing around the truth. It is also rollicking reading for those who love words and the not always forthright uses to which they are put." --Chicago Sun-Times
نمایش بیشتر بستن

مشخصات فنی How Not To Say What You Mean